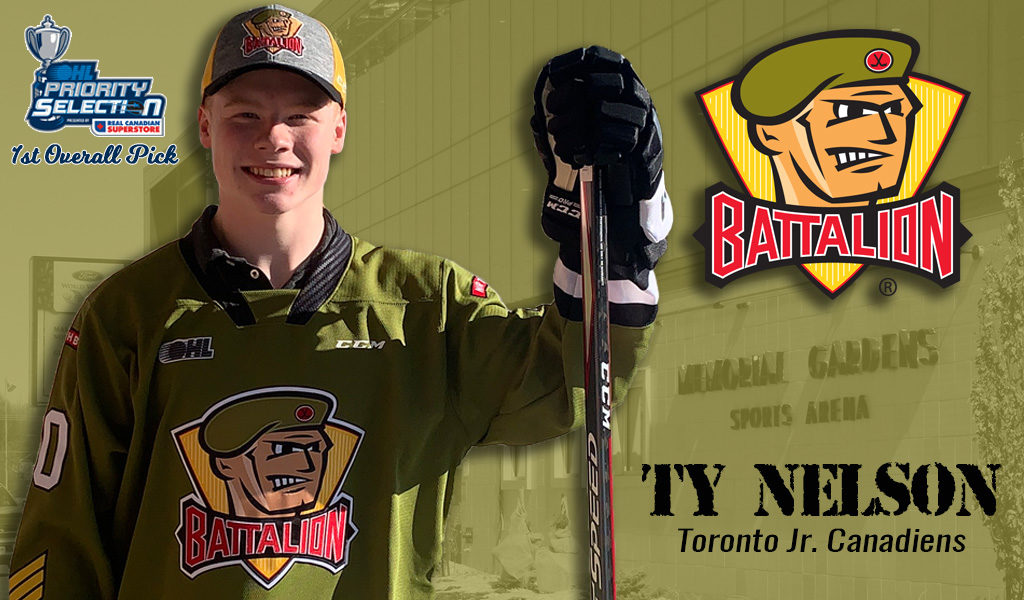 The announcement was made over an online news conference hosted by the Battalion Friday afternoon.

“It’s an honour to receive the Jack Ferguson Award as the first overall pick of the OHL Priority Selection,” said Nelson. “I want to thank my mother, father and sister for all of their dedication, love and hard work they’ve put into helping me get here. I wouldn’t be where I am today without my family. I also want to say thank you to all of the coaches, teachers and trainers that I’ve had over the years as they’ve shaped the player that I am today. Lastly I want to thank Mr. Abbott, Mr. Dennis, Coach Oulahen and Coach Winstanley. It’s an honour to be drafted by an outstanding organization like North Bay. To the Battalion fans, I can’t wait to get started.”

Nelson is the first of 15 selections currently held by the Battalion ahead of Saturday’s proceedings and joins a developing young club that features 2019 first round selection Liam Arnsby along with 17-year-old twin brothers Alex and Paul Christopoulos in front of 6-foot-6 netminder Joe Vrbetic.

“Those close to our team have seen the growth in the second half of the season and the promise in our young group,” said Battalion general manager Adam Dennis. “It’s imperative that we add to this momentum, and we feel that in Ty we’re adding a player and a person that can do that. Getting to know Ty and his family, we know that we’re bringing a top class person into our dressing room and somebody that can really add to what we’re building here.”

Nelson led all GTHL defencemen in regular season scoring with 32 points (11-21–32) over 33 games before pacing all rearguards offensively throughout the GTHL Playoffs, putting up 12 points (1-11–12) over 11 contests as the Toronto Jr. Canadiens were crowned league champions. The Toronto native was a member of Canada’s bronze medal-winning team that competed at the 2020 Youth Olympic Winter Games in Lausanne, Switzerland this past January. A swift-skating, puck-moving defenceman that stands 5-foot-8 and 174Ibs., Nelson was born March 30, 2004, making him eligible for the 2022 NHL Draft.

Nelson is the 2020 recipient of the Jack Ferguson Award presented annually to the player selected first overall in the OHL Priority Selection. The ‘Fergie’ recognizes the dedication and contributions made by Jack Ferguson during his 25 year association with the OHL, first as a scout with the Ottawa 67’s and followed by his appointment as head of the OHL’s Central Scouting Bureau in 1981 as its Director of Central Scouting. Nelson is the second member of the Battalion franchise to receive the award following defenceman Jay Harrison, who was the Brampton Battalion’s first-ever draft pick back in 1998. He’s the first defenceman selected first overall since another Jr. Canadiens rearguard in Ryan Merkley was selected first by the Guelph Storm in 2016. Prior to that, Jr. Canadiens blue line standout Jakob Chychrun was selected first overall by the Sarnia Sting in 2014.

“Ty was one of the leaders on his team this year and a big force behind their GTHL championship,” said OHL Director of Central Scouting Darrell Woodley. “He never stops competing and is a bulldog on the ice. He also finishes all his checks which makes him very hard to play against. He is an offensive threat whenever he is on the ice, especially with the puck on his stick, and averaged over a point-per-game this season. He possesses a very good and accurate shot from the point and also finds lanes well to get the puck on net in order to either create rebounds or score. There isn’t much he doesn’t do well and he will be a very impactful player at the next level.”